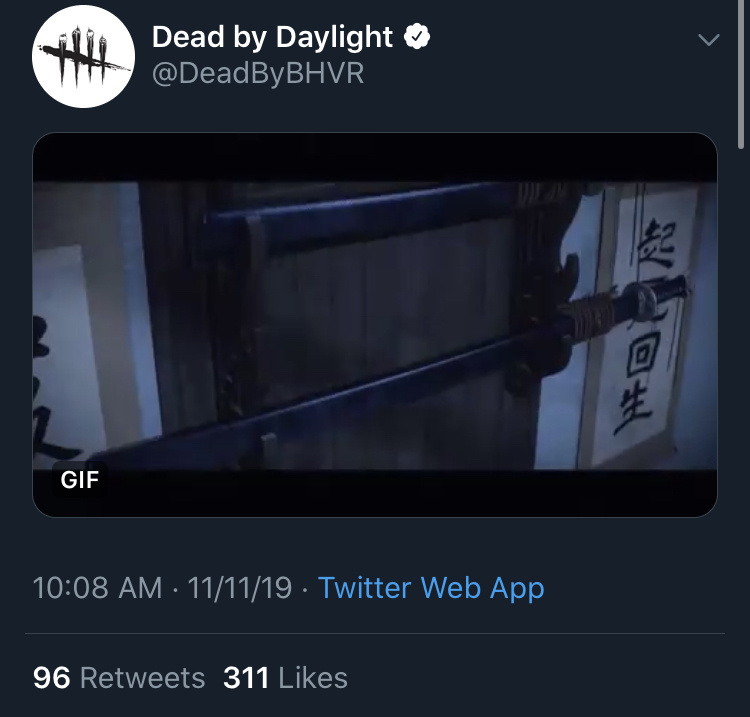 So when I first saw this I thought to myself, “what in the actual #########”. Than I thought more reasonably. This tease could mean 3 things.

1) it’s a teaser for sprit changes. You could or call it second cut because they’ll probably gut the spirit with her upcoming changes. The first cut was when they killed nurse, but that’s up for another conversation.

2) it could be a chapter tease and we might actually have new chapter that ties itself with shattered bloodline. It would make sense to receive the spirits father as he is in the lore. This possible upcoming chapter would also better help the devs and their creative team show off their writing skills with the dlc linking to its predecessor. In the lore of the spirit it explains how her father caused her to be in the state she is in. Perhaps, the entity took the spirts father as well.

3) it may also mean that she is getting her own chase music. Which is less exciting, but I guess it would be cool to see. I personally find that her own chase music may hurt survivors, but I rather not try to explain my reasoning for that as I can’t begin to explain in words as of the moment.

NOTE: if the spirit is changed this upcoming patch than we may not see the doctor changes until the following patch.

what do you think?

EDIT: you guys are a bunch of lame heathens. Instead of being excited for something like a potential dlc, all you do is fight over is spirit nerfs. I asked you what you thought about the teaser not how you felt about spirit. Yes, we can agree she needs changes, but we all also agree she doesn’t need to be ruined either. Just be happy something is happening and call it a day. Otherwise, get out of this discussion and go complain in the many discussions that are typically titled as so “DONT NERF SPIRIT” (REAL TALK), “SpiRiT Is FiNe”.