An adaptable killer, The Predator's power, THERMAL VISION, can allow the Predator to more easily see prey from a distance, and utilizes Energy for his addons. His perks, TRIAL BY BLOOD, MANIC KILLER. and INTIMIDATION focus on securing kills and sacrifices more easily.

THERMAL VISION can be activated, and for five seconds, The Predator can see all objects and people that give off infrared radiation. This includes generators, survivors, fresh blood, and some objects in the map. When activated, the eyes of the Predator's mask will glow bright red. Thermal vision has a five seconds of use, and has thirty second cooldown that cannot be adjusted by addons. However, the Predator is able to gain other powers based on addons.

The Predator's addons costs ENERGY. ENERGY is indicated next to the addons icons, represented by a blue bar. The Predator starts with 8 energy by default, which is absorbed by certain addon abilities. When the Predator runs out of energy, he has to go to a generator with progress done on it and absorb it. It takes approximately five seconds to absorb a generator, but for every empty energy slot the Predator has, that generator will use 1% regression after it is absorbed, and will start passively regressing.

The Predator keeps extra energy cells on him for use at the cost of other equipment.

The Predator starts the trial with 2 more energy.

The Predator mimics the sound and voices of other prey its encountered using its Bio-Mask, taking from a database to trick prey into coming for a rescue.

When activated, the Predator can select a location in which to stage an attack. The player's HUDs will reveal the aura of a teammate falling to the ground and several moments later, of the Predator's aura picking them up. This will only happen for survivors outside the line of sight of the mimicry. After several moments, it will reveal the aura of the Predator hooking a survivor, on the nearest hook. This will appear in the HUD as a random survivor being hooked; if all survivors are away from each other, it will select the survivor furthest from them to represent being hooked. This goes away after a survivor investigates, or until the mimicry expires (about sixty seconds). During Vocal Mimicry, the Predator is Undetectable.

The Predator can launch a lesser missile from his gauntlet, allowing him to damage and wound survivors.

The Predator utilizes a painful and sickening poison, which allows for better tracking of escaped prey.

Upon a hit, it induces vomiting from a survivor and creates a sickness cloud. Sickness cannot be spread to objects or other survivors. Healing a sick survivor requires a medkit. Sick survivors are broken for 60 seconds. Stacks.

The Predator can release a built up charge of energy from his gauntlet, allowing him to explode and disable nearby electronics.

When used, nearby generators within 24 meters explode and regress 5%. Generators cannot be worked on or kicked by the killer for 30 seconds if affected by Charge Emitter. Does not start passive regression. Survivors carrying flashlights will have it explode in their hands, losing 20% of its charges and causing the survivor to drop it. When picked up, it cannot be used for 60 seconds.

Costs 2 energy for every use.

An armored glove that allows the Predator to tear through walls and destroy environments.

Allows the Predator to target an object in the environment and shoot toward it, or to target a higher and accessible elevation and climb up on it. Has 40 second cooldown.

A trap that has a cloaking device installed in it. Once placed, it will cloak into pseudo-invisibility.

Once a survivor steps on a Cloaked Trap, a binding energy will trigger and grab them by the heels, hanging them upside down. Does no damage, but highlights the trapped survivors aura for the Predator. Limit of 10 traps. Takes 10 seconds to remove self from a trap.

A bladed disk that is user-controlled, allowing the Predator to navigate it through obstacles.

Grants the Predator the ability to throw a Smart Disk. Once thrown, the Predator will go into a third-person camera of the disk and control its movement. The Predator cannot move during this time. The disk moves 5% faster than base killer speed, but can go through pallets and vault points. If it hits an object, hits a survivor, or does not hit anything within 10 seconds, it will deactivate. Can down survivors.

Costs 1 energy for cloaking and decloaking.

The Predator utilizes cloaking technology in their hunts. Its their prime weapon against prey.

Can activate a cloak similar to that of the Wraith, except its near instant (1.2 seconds to activate, 3 seconds to deactivate). During this time, the Predator's terror radius is reduced to 0 and is Undetectable.

The Predator uses a netgun, which can greatly slow survivors down.

When activated, the Predator obtains a netgun. Upon a successful hit, the victim cannot fast vault windows or pallets. They must hold down the action button (M1) to remove the net, which slows the survivor by 3% and takes five seconds to remove. The longer the net stays on, the more it tightens, causing a 1% Hindered status effect every three seconds. Once a survivor is hit, the net is automatically taken off. Has 20 second cooldown.

Costs 2 energy for each shot.

A signature Predator weapon, the Plasmacaster is a shoulder mounted weapon that fires hot plasma at the target.

Can be activated with M2. Once fired, it lets loose a cannonball of plasma at the designated target, indicated by a three-point laser for targeting. If trained on a survivor for five seconds, the shot will be heat-seeking, and will attempt to follow the survivor. Obstacles in the environment or other survivors can confuse the targeting and undo heat-seeking.

If hit, the survivor will become injured. If charged and it hits the ground or an object near a survivor, it will stun the survivor for two seconds.

The Predator's movement speed is reduced to 90% while charging Plasmacaster.

A whip with blades on the end, which allows the Predator to strike at a greater range.

Replaces the Wrist blades. Predator's weapon now reaches an additional 4 meters and can strike over pallets.

Utilizing more abrupt and forward methods of dispatching prey is just as well for some Predators.

Allows the predator to place a mine on a location. Requires 4 seconds of setup. When selecting the activation button, automatically blows up the nearest mine, which downs survivors in one hit. Can be disabled. Limit of 2 mines.

The Predator's Wrist Gauntlet is improved to take in more energy from a single power source.

The Predator brings with him tagging equipment, which allows him to track nearby prey to mess with or to more easily kill.

Grants the Predator the ability to tag survivors. A successful ranged or basic attack will caused a survivor to be tagged. Tagged survivors are highlighted to the Killer when outside his terror radius. Tags are removed after a survivor is put into the dying state.

Your eagerness to please and prove yourself to the Entity fuels your apatite for blood.

The desire to keep trophies is overwhelming, sometimes at the cost of displeasing the Entity.

Anyone would be foolish to run toward you, even the altruistic find themselves betraying each other for self preservation. 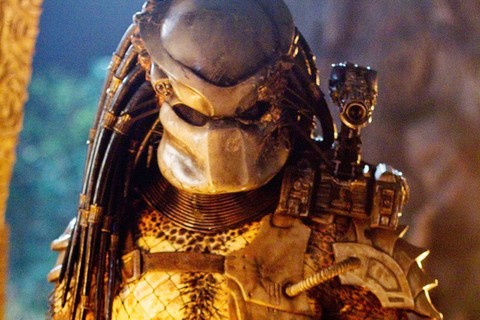