As new technology continues to develop, so too does the sinister undertone of those who wish to exploit it for malicious intent. In the blind spot of society lies a deep web of criminals and adversaries, looking for their next pastime to spy on.

An unnatural conglomeration of photography and flesh, "The Witness" serves as the embodiment of the intrusive nature of recent technology. 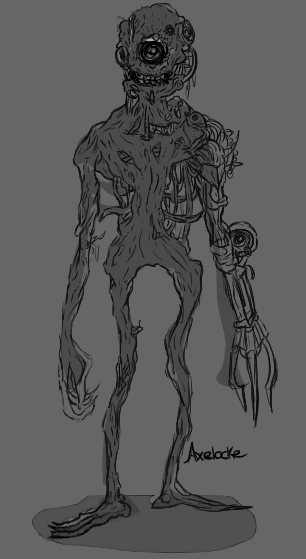 "The Witness" is an observational killer, able to survey the Map using mounted Cameras that can locate, mark, and hinder survivors. (Difficulty: Intermediate)

It's personal perks, Static Sight, Scopophobia, and Hex: Disorientate, allow it to apply harmful effects to those it looks at, and to those that see it.

Scopophobia: The fear of being watched. Unlocks potential in one's aura reading ability. Survivors who clearly remain in your line of sight for a set amount of time are marked temporarily, allowing you to see their aura for a set duration. The tiers affect how long the target is marked for.

(The perk icon would progressively fill up, as if earning tokens, to indicate how close a survivor is to being marked. Losing sight, ending a chase, or changing targets will reset the perk.)

Hex: Disorientate: Your horrific presence drains your victim's ability to flee. Survivors with their sights on you are affected by the Hindered status effect. The tiers affect the distance at which this occurs. Effect persists until the totem is cleansed.

(This perk encourages survivors to keep their vision focused on their surroundings rather than the killer, until the totem is cleansed.)

(The indicator that a survivor has been hooked and their aura are hidden. The aura isn't permanently disabled, but gradually comes back. Staying in close proximity to the hooked survivor will cause their aura to reappear faster. The survivors still scream when hooked.) 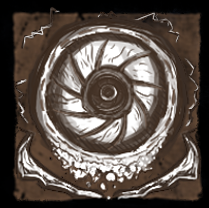 The cameras appear as weird amalgamations of flesh and lens. "The Witness" by default can set two cameras down around the map. Channeling your power while looking at a deployed camera (similar to Freddy's generator channel) allows you to change perspective to the cameras. From here you are given full control of the camera's vision, including the scroll wheel to zoom in/out, but the camera will remain stationary.

Holding space will allow the camera to scan with a precision reticle. From here, survivors or generators that meet the camera's reticle will gradually be highlighted in red. When fully highlighted, the survivor will be marked with the exposed status effect. Generators that are highlighted will surge and regress. Survivors can dismantle a camera similarly to cleansing a totem.

To exit a camera's view, you can either press CRTL to instantly return to where "The Witness" was before channeling, or channeling again while using a camera to switch over to any other deployed cameras.

As a passive, any survivors within view of an idle/active camera suffer penalties to repair and healing speeds. Upon leaving a camera's view, the camera will remain in the position you left it.

The Witness' add-ons provide additional utility to it's mounted cameras.

"Spare Retina" add-ons allow the cameras to zoom in closer at the cost of slower highlighting.

"Flashbulb" add-ons will stun the survivors with a camera flash and reveal their location to the killer, triggering the same effect as being blinded by a flashlight upon dismantling the camera. Rarities effect how long it takes to dismantle a camera and how long the blind persists.

"Mobility Augmentation" - The cameras gain mobility, and can be controlled freely. Generator surges are no longer possible.

This was a fun mini project to test creativity and sketch a bit, I mentally ran dry when it came to add-ons, though. Feel free to leave any feedback or comments. Take care, ya'll.